Here’s how two minutes in the shower can make a difference in your healthcare journey. 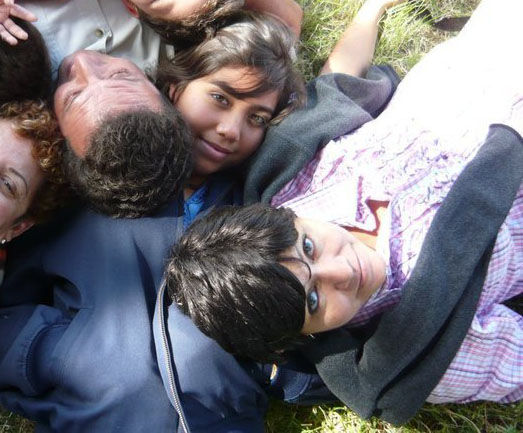 I am the only daughter of five kids. Growing up in Tuxtla, Chiapas, Mexico, my brothers and I had a great childhood. We had everything we needed, or at least as far as I could tell. There was always food on the table. I had a roof over my head and toys, and I went to school. I didn't realize that my dad worked two or three jobs my entire life. He had maybe an hour a day to eat and relax. My parents, brothers and I were all very healthy until I was in high school.

That’s when my mom got sick. We soon found out it was breast cancer, and shortly after, my aunt, my grandma and another aunt were also diagnosed. Within three years, four females in my life developed breast cancer.

As a high-schooler, I didn't understand what was happening at the moment. I knew that my mom was struggling with her health. She received her treatment from whatever was available at the moment, and I soon realized how dependent we were on the public health system. Unfortunately, the treatment wasn't enough. My mom passed away in 2011. Later my grandma and aunt also passed. Fortunately, one aunt was a survivor. She's like superwoman in my eyes.

My journey to a higher education

After finishing high school, I was trying to figure out what to do with my life. I always had a passion for science, but what happened to my family made me want to pursue a science degree. However, I grew up very traditionally Hispanic, meaning I was supposed to become a housewife. I was to live at home until I was married and then begin to raise children.

I wasn't comfortable with that idea. I was still trying to understand what happened to the women in my life. So I began working three jobs, and when I had enough money saved, I moved across the country to study genomic biotechnology.

Being in school was hard for me. I knew women who went to college, but not many of them were in leadership positions. I wanted to make an impact, but the people in the areas I was interested in were all male, so It didn't seem realistic at the time for me. So I went away, and I started studying hard. While researching, I learned that my great-grandma also passed away from breast cancer. That made me study even harder. I graduated in the top 10% of my class.

Now I will be the first woman someone else knows who did go to college and graduated.

After I finished my bachelor's degree, I focused on research and soon moved into diagnostics. Being in diagnostics made me want to learn how I can make a change. I recognized I needed to get a master's degree. A huge influence was this: I knew where my family's illness came from, but how could I cure it?

We Hispanics are working in science and technology. We're responsible for ensuring equal opportunities for people not just to learn but also to grow in different educational and development opportunities. Reaching out makes it easier for our community to grow.

I found a lump

While applying for my master's, I noticed lumps in my breast. Since I had already seen every other woman in my family go through breast cancer, I knew that even before understanding the science, I was predisposed to it. That’s why I learned how to check myself at a very young age. Every day, I would check my breasts. So I was very familiar with how my breasts felt.

When I started to feel something weird the next day, I made an appointment with my OB-GYN doctor. I trusted her, and she had me get an ultrasound done. She then referred me to an oncologist.

I remember the first time I went to the oncologist like it was yesterday. It was scary knowing I was seeing the same oncologist my mom went to. I told him he treated my mom when she was sick, and that now I'm scared I might have the same thing. He reassured me that everything would be fine. Just because my mom passed away didn't mean I would pass away. He said it was probably very early since I was so vigilant with my checkups. So he checked, and eventually, he referred me to another, a more qualified oncologist for situations like mine that were detected very early on.

Visiting the other oncologist, I learned that I had a cyst, and it was not a tumor. While doing the checkup, they found that I had small, tiny tumors in my left breast. I don't remember what happened next. It was like watching a movie of myself, and I wasn’t participating in everything that was happening.

My new oncologist said there were two options: Either wait and see how it develops and most likely get cancer, or do something now, receive a radical mastectomy and live a long, healthy life without having to deal with cancer.

I went home, thought about it, prayed and talked to my family. I decided the best option was to get a radical mastectomy. At 26, I never thought both my breasts and lymph nodes would be removed.

So I had the radical mastectomy, and all that was left was my skin. Fortunately, I qualified for reconstruction, so I didn't lose my nipples or have to have a skin graft.

After the surgery, my oncologists were able to do the pathology report. They informed me that some of the tumors had already started to turn cancerous. I was lucky to receive the surgery when I did, or this would have been a different story.

Post-surgery, I was left with some massive scarring and trauma. I was emotionally destroyed after it. I remember lying on my bed and putting a pillow over my head to scream, as my grandma was there taking care of me after the surgery. I couldn't handle how my body looked. I'd look in a mirror and not recognize myself. I didn't recognize my face or my arms and, of course, my chest. It was horrible seeing the full transformation that I went through. I also didn't feel like I was a cancer survivor because I didn't go through the same struggles my mom, aunts and grandma had. Mentally I wasn't OK, but I had a mission, so I went to therapy. I went to every mental health resource available around me, and eventually, it did not go away completely, but it became manageable.

If education isn’t right in front of you, make an effort because it's worth it. If it’s not natural, do everything you can to read articles or educate yourself about the topics affecting all of us. It's important to know what's happening with yourself and our society, and how our culture can sometimes be blinding when there are so many issues going on.

Two months after my radical mastectomy, I moved to California to start my master's program. Throughout the first year, I was still in recovery. I was still feeling pain, and I was still feeling the scar tissue around my chest. When I would stretch, it was so uncomfortable and mentally draining, but I had a constant reminder that eventually I'd get through this, and I'd make a change in the world. I would help get medications out to help others, and not just for developed countries but for developing countries, too. So that other people's moms who rely on public health systems have drugs to benefit them.

The most important thing that I will say is be fearless. Being bold and fearless opens new doors. We inherit things from our parents, but just because we grew up like that doesn't mean it's right. We can go higher, be stronger and make a bigger difference if we're just a little bit bolder. I always tell everybody, just take away that fear that you grew up with and do whatever you think is impossible.